In my previous post I tried to stress the need for redundant connections between the switches. Multiple paths help us avoid a single point of failure in our designs. However, adding new connections inevitably create loops causing multiple problems. The last section of lesson 19 presented the solution: Spanning-Tree Protocol. It's time we learn a bit more about Spanning-Tree Protocol terminology and scrutinize its operation. So hold down to your hats as we begin the ride ;)

In order to understand the nuts and bolts of Spanning-Tree Protocol (STP), we need to get familiar with its terminology first.

Spanning-Tree Protocol Terminology
The ports participating in STP play different roles and those roles use different states of operation.


As soon as you familiarize yourself with STP port roles and port states, it is time to explain how Spanning-Tree Protocol works. 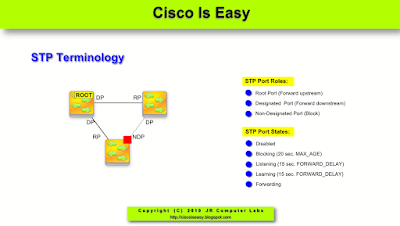 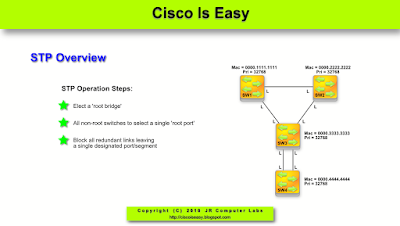 Bridge Protocol Data Unit (BPDU)
All switches communicate with one another using special frames called BPDU. Those frames contain multiple parameters that switches are going to process in order to create and maintain loop free topology.

Root election is based on a single parameter that is found in the BPDU frame called: Bridge ID. The switch with the lowest Bridge ID becomes the root. Bridge ID has the following format:

Priority is configurable parameter that is used to elect the root bridge a device you want to be the root. The default value is: 32768. The lower the value is the more likely for a switch to become a root.

Base Mac Address is the unique mac address every switch has been given by the manufacturer. It is a tie breaker in case the priority on all switches is identical.

If you've understood everything so far, you're ready to look at the election process in more detail. 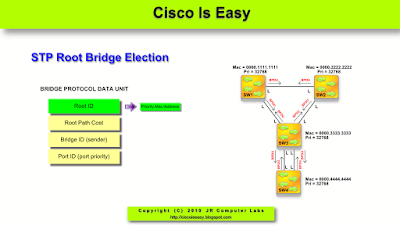 Imagine that we've just wired our topology in the pic. 3. Now, we start up all the switches and as soon as their ports transition to LISTENING state, they begin to send BPDU frames out of all active ports. In those frames both Bridge ID and Root ID parameters point to their own priority.base-mac-address value. In other words, each switch thinks it is the root bridge. It is like each switch is saying: "Hi there! This is my name (Bridge ID) and by the way I'm the root (Root ID the same as the Bridge ID value). Since they are processing the incoming BPDU's from the neighbors, SW2 and SW3 realize that SW1's Bridge ID is lower than theirs. From that point onwards, they begin to relay BPDU frames saying that SW1 as the root bridge.

In our example, SW3 upon receiving the BPDU from SW1, SW2 and SW4  compares their Bridge ID with its own and the conclusion is that SW1's Bridge ID has the lowest value (base-mac-address breaks the tie). From this point onwards, it relays the BPDU frame out of all its active ports with the following parameters:

Similarly, all the switches agree that SW1 is the root (their own Bridge ID is higher).

As soon as the root has been elected, all non-root switches begin to calculate which port is the best (the least cost) towards the root bridge. This port will be called the root port. 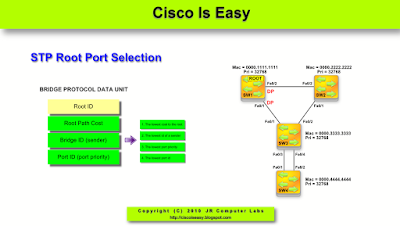 Icons designed by: Andrzej Szoblik - http://www.newo.pl
SW2, SW3 and SW4 receive BPDUs from different directions. For instance, SW2 will receive them on its port F0/1 and F0/2 (look at pic 4). The accumulative cost (the sum of the cost in the path towards the root), is taken into consideration. The lowest cost to reach the root becomes the root port.

How the cost of path is calculated?

Each speed has its arbitrarily assigned cost which is configurable. A few examples are below:

The root bridge (here SW1) is sending its BPDU frame every 2 seconds. It uses the parameter called: Root Path Cost in BPDU to advertise the cost to the root. It puts the value of '0' in it, as it is the root bridge and has no cost to itself. The frame is sent out its port F0/1 towards SW3 and F0/2 towards SW2. SW2, upon receiving it, adds the cost used to reach the sender of BPDU based on the predefined speed-to-cost value (all ports in our topology are FastEthernet=19).

SW2 is going to advertise its best (as of now) cost out of F0/1 port towards SW3. SW3 will receive BPDU from SW1 with the Root Path Cost=0 on its F0/1 port. It will also receive BPDU from SW2 on its F0/2 interface with the Root Path Cost=19. As both ports have the cost of 19 towards those BPDU senders, the following math is done to choose the least cost path towards the root bridge:

It is clear that the direct connection towards root bridge via F0/1 is going to be selected as the root port.

What if the Root Cost Path is identical?

We run into that situation on SW4. It receives BPDUs on its ports F0/1 and F0/2 with the following parameters:

The following algorithm is used to determine the root port or designated port (in order):
Equipped with that knowledge let us consider SW4 now.
The root ports have been selected on all non-root switches (pic. 5). STP will select a single designated port (forwarding) per segment to block the redundant path towards the root bridge. This way the loop does not exist. Should any of root ports fail, it will take around 30-50 seconds to put the blocking port into forwarding state. 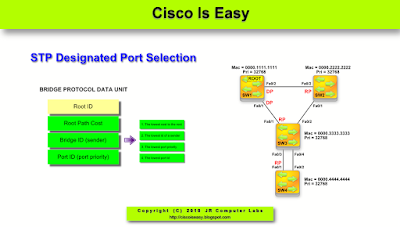 Since root port is the best port towards the root bridge it is going to be in the forwarding state (look at the beginning of this lesson). What is left to do, is to choose one of the ports between SW2 and SW3 as designated (forwarding) and the other as non-designated (blocked). The same applies between SW3 and SW4. Either SW3 will block its F0/4, or SW4 should block its F0/2 port.

SW3 will block its F0/2 (non-designated) and SW2 will make its F0/1 port designated (forwarding). The process will look as follows:
And last selection is going to happen between SW3 (port F0/4) and  SW4 (port F0/2). 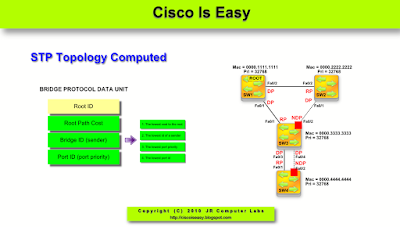 This process happens in the LISTENING state of all ports. Since the topology has been computed and does not have loops (blocking appropriate ports), it is safe to move to next states: learning and finally forwarding.


In the next post, we will look at this process one more time using command line interface and real equipment.
at October 23, 2010