At this stage you should be familiar with the concepts related to TCP/IP traffic flow and switch operation. You should also feel confident about how to diagnose basic layer 2 connectivity issues. For the details please review my previous posts. In this one, I am going to extend your understanding of layer 2 technologies by introducing Virtual LANs (VLANs).

Before I introduce our main topic let's define the problem which VLANS address first. This way, it's going to be easier to understand them.

Problem With Switching
As you remember from previous lessons, each port of a switch creates its own collision domain (for details look at lesson 9 in this tutorial). In addition to that a switch can use FULL DUPLEX connectivity when connecting other devices to its ports (computers, printers, switches, routers). That allows the ports to SEND and RECEIVE streams of bits at the SAME time. This is due to the special design of a switch. Thus, the efficiency of transmission is radically increased when compared to its older cousin a hub using half-duplex connections (sending or receiving but not both at the same time).

However, switches still maintain ONE BROADCAST DOMAIN. This means that in some situations they flood frames out of all active interfaces except the one that receives the frame. The flooding occurs if either of these are true: 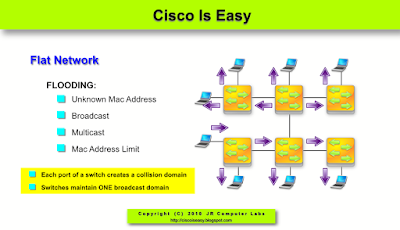 Icons designed by: Andrzej Szoblik - http://www.newo.pl
In a flat network like the one depicted above (Pic. 1), imagine a thousand computers sending broadcast traffic (e.g. ARP requests). They will be propagated everywhere as per rules described earlier. Imagine another situation in which a broken NIC (Network Interface Card =  Network Adapter) sends thousands of broadcast frames per second. Those will be flooded to all hosts interrupting them as they need to process broadcast frames. In those situations not only do we interrupt all hosts by sending frames to them, but also saturate links with garbage data unnecessarily. Why would my computer have to listen to broadcast traffic sent by HR server if I work in IT department? I do not use HR server's resources at all. Exactly!
VLANs Are Broadcast Domains
Virtual LANs are the method of creating multiple broadcast domains of smaller size in a switching infrastructure. They are commonly used solution to the above mentioned problems. By configuring VLANs on the switches you create multiple broadcast domains which are treated as separate, isolated LANs which CANNOT communicate with one another by default. This allows us to contain the broadcast/multicast/unicast traffic WITHIN a boundary of a given VLAN.
Pic. 2 - VLANs Are Broadcast Domains 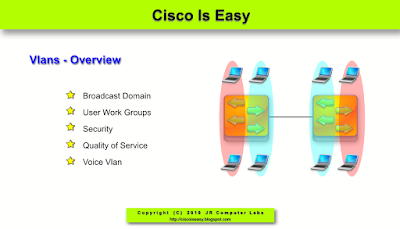 Icons designed by: Andrzej Szoblik - http://www.newo.pl
If you consider traffic in the Pic. 2, the computers in red transmit their bits onto the wire, switches will send those only to computers that are in the same VLAN, that is red in this case. For instance, if the bottom right red computer sends layer 2 broadcast (destination MAC address = FFFF.FFFF.FFFF), only computers in red VLAN are going to receive this transmission. Computers located in turquoise VLAN will NOT receive those frames anymore. This way we can segment the traffic between different hosts based on criteria such as groups of interests (workgroups), type of traffic (e.g. VoIP), type of the application used, user location, etc. So, the major benefits of using VLANs are:
I hope the above description sheds enough light on what VLANs are used for. Now, is the time to look at some details regarding their configuration.
VLAN Port Types
In order to segment the traffic, the hosts generating it must be assigned to the appropriate VLAN since all ports of the switch are members of VLAN 1 by default. The process of configuring that usually involves three major steps:
The above mentioned configuration steps define two different port types VLANs can use:
When is the trunk (multi VLAN) port required?
The below picture (Pic. 3) illustrates the need for it.
Pic. 3 - VLAN Port Types 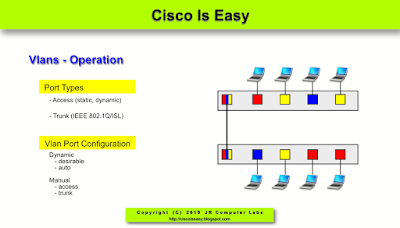 Icons designed by: Andrzej Szoblik - http://www.newo.pl
The grey rectangles symbolize two switches. The colors, represents different ports assigned to different VLANs. Of course, VLANs in practice use numbers, not colors, to distinguish between themselves. When any bottom computer sends broadcast (or unicast towards another computer in the same VLAN/color connected to the upper switch), the port connecting the two switches must be trunk (multi-vlan port). In such situation w must allow all VLAN members to communicate with their peers in the same VLAN, irrespective where they are located. Both switches have yellow, red and blue members here! And according to the rules, red computers must be able to talk to all red computers located on the same and all other switches as well (yellow-to-yellow, and blue-to-blue).They are members of the same Virtual LAN after all.
In such design, in which members of the same logical network (VLAN) or broadcast domain are connected to different physical switches, the connection between them must be a trunk. Trunk ports run a special protocol called IEEE 802.1q (Cisco have also their own protocol called ISL, details of which are beyond the scope of this tutorial). This protocol is responsible for 'tagging' the frames (injecting extra information into their headers), while sending them out the trunk port.
Why?
Let me explain. Look carefully at the Pic. 3 and imagine that the computer connected  to yellow VLAN is sending broadcast towards all computers that are in the same, yellow, VLAN. The port between the switches is trunk, and as such allows ALL VLANs in and out. But the problem is that the receiving port on the upper switch gets the Ethernet frame on the port working as trunk as well. So, this port is also a MULTI-VLAN port! How does this upper, receiving, switch know which VLAN the frame is coming from? Well, it does NOT know whether the VLAN sending this broadcast was yellow, red or blue. This is where the sending (bottom) switch, using the trunk as outbound port, is going to inject extra 4 bytes into the Ethernet frame while transmitting it out. The tag will contain VLAN ID (number) of the sender. This way, the broadcast frame will have an extra information allowing the receiving switch (upper one) to recognize which VLAN it is coming from and forward this broadcast to ALL computers in the same VLAN (here yellow VLAN).

NOTICE!
The TAG  is stripped off on the outbound ports configured as ACCESS ones. The tag is useful only on trunk ports.
Before we finish this VLAN overview lesson, let me show you what information this TAG contains.
Pic. 4 - 802.1q TAG 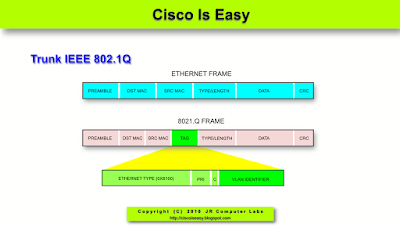 The 802.1q tag is injected between the source MAC address and the type field in the Ethernet II header (pic. 4). It consist of two fields taking two bytes each:
802.1q Native VLAN
There is one more thing I need to touch upon that is related to the 802.1q trunk port. That is the concept of Native Vlan. The designers of the protocol decided to send frames coming from so called 'native VLAN' out the trunk as UNTAGGED. In other words this frame does not have any tag inserted into the Ethernet header. So, frame coming from 'native VLAN' is a regular Ethernet frame. As long as the switches agree on the trunk link which VLAN is their 'native VLAN' for this trunk, a frame arriving on the trunk port without the tag is assumed to be coming from the same native VLAN the sender was transmitting. The default  'native VLAN' is VLAN 1, since this one cannot be removed from the switch. Probably the reason VLAN 1 is the 'native VLAN' by default is becuase switches originate frames such CDP, VTP, STP from this VLAN and there is no need to tag them as they are switch-to-switch communication only.

NOTICE!
As of the time of writing this tutorial, all ports of Cisco switches belong to VLAN 1 by default which is also the (untagged) 'native vlan'. That VLAN is not going to tag frames on trunk-to-trunk connections.

I am sure you realize what can happen if the two ports connecting switches use different VLAN ID for their 'native VLAN'. Yes, that can cause leaking frames between VLANs. And this is a serious security issue. So keep the same 'native VLAN' on trunk paired ports between switches.

In my next post we will look at the same concepts from the command line perspective. I will also introduce VTP protocol as well as Inter-VLAN routing.
at September 29, 2010