Those who try to study networking technologies sooner or later want to test what they have learned through implementations.

Let's assume that you are a user of big C products, then you will have bunch of choices:

I wanted to find out more about the last one, so I went ahead and spent some time on digging information up on the NET. What follows are a few findings which I have decided to compile in one post to give you an overall picture of what it is.

This article is only for educational purpose.
The IOU software is owned by Cisco and only authorized people can use it.
You have been warned!

As for the basic information about the IOU, I have found the article published by Jeremy L. Gaddis from http://evilrouters.net. That was my starting point of a search for more information. The article can be found here. The 'Legal Warning' mentioned in Jeremy's post applies here as well.

Cisco uses this software offering virtual labs for CCNA/CCNP/CCIE candidates for a relatively affordable price. Anyone who doesn't have access to lab and is interested in getting certificate should consider purchasing their virtual lab products.

Okay, let's get to the point of this post. I understand, that there are few files involved in IOU installation:
After few weeks of collecting bits and pieces of information here is what I have found.

NOTE
In new Ubuntu/Mint distributions the necessary library cannot be installed via repository.
You need to download and install it manually using the following command:

Library can be downloaded at:

If you use older distributions you can install the library using apt-get command as shown below:

Then, create a symbolic link (first find where the library is installed):

The result should point the directory where the lib was installed:
/lib/i386-linux-gnu/libcrypto.so.0.9.8

(The above ln command is one line)

Cisco Licence to Run the Software

Of, course I can't help you with obtaining licence or images!

The licence is a text file named 'iourc', that must be placed in the folder where the lab will be used. For instance:

Then, I understand the images should be placed in the same folder (where L3-image and L2-mage are actual files):

The topology, according to the sources on the Internet, is a text file called NET. One can assume that IOU image will use this file to connect virtual routers and switches together. However, creating such topology requires understanding of IOU image will reference particular interfaces.

So, if I am correct it is possible to create a simple topology file looking like this: 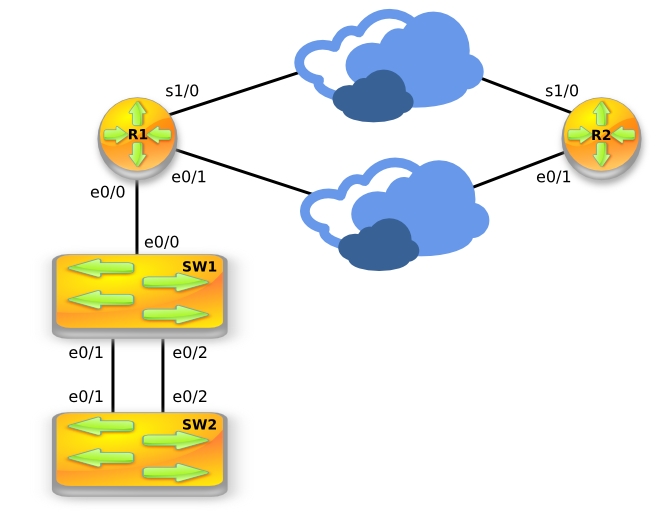 Then, the NETMAP file content would have to be:

Script starting the above topology could be the file placed in the same ~/lab folder and be named: enable.sh.

Activating routers would be a simple command:

Accessing script could be placed in the same folder ~/lab, and be named: telnet.sh. It's content could use gnome-terminal to access all devices in one window with tabs (that's what I use for GNS3 in my linux).

NOTE
For some reason the new Linux distro's gnome-terminal does not allow tabs. You can install mate-terminal instead:

Then in the startup script, change the first line that reads
gnome-terminal\
into
mate-terminal \

That should do it.

Accessing the lab would be easy by this command:

Shutting Down the Lab

That could be the third script named: shutdown.sh, looking like this: